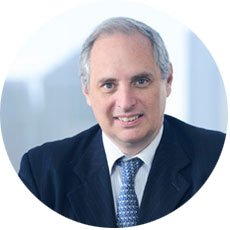 In his professional activity, Alfredo has concentrated in the areas of commercial and corporate law, especially in the fields of mergers and acquisitions, contracts and privatizations in the areas of energy (oil, gas and electricity) advising local and international clients, having been deeply involved in the privatization of public enterprises from 1989.

Since 1995, representing different international clients, has negotiated various turnkey plant contracts for power generation, gas pipelines, gas fields, industrial plants, equipment construction contracts and plant maintenance contracts, both in the Argentine Republic and in Latin America, also participating in the negotiation of the financing structures of those projects. It deserves to emphasize his participation as chief legal negotiator, representing the Operator, in the CAMISEA Project (Peru), involving a total investment of more than three billion dollars. He has also participated in ICC arbitrations in matters related to his specialty. More recently he participated in the structuring of the JV between YPF and Chevron for the development of the Loma Campana shale field in the Vaca Muerta formation, the first contract of its type in the country.

Advisor of the Council for the Consolidation of Democracy- Presidency of the Nation (1987-1989),

Recognized by Chambers & Partners Leading Individual in the Republic of Argentina in Energy & Natural Resources for 2006 and 2007.

Taught graduate courses on Common Markets and Integration Law at Universidad de Belgrano and on Constitutional Law and Human Resources at several national universities. Speaker in conferences in Argentina, Latin America and the Unites States on issues he is specialized in.

“The Principle of Universal Jurisdiction and the Duty to Judge or Extradite Individuals Accused of Committing Serious Crimes against Human Rights (the “aut dedere, aut judicare” Principle)” Chapter of the book “Treaty of Constitutional Rights”, 2014.

“Applicable Religious Rules according to the Law of the State”, Argentine report XIX Congress of the International Academy of Comparative Law, Vienna, 2014.

“Boudou’s Deprivation of Rights Would Protect Institutions” – www.bastiondigital.com on June 28, 2014

“We asked for institutions with this purpose” – www.bastiondigital.com on February l 6, 2015.

“The law of democratization of political representation, transparency and electoral equality”, collective publication “Commented Constitution of the Argentine Nation”, Hammurabi, to be published.