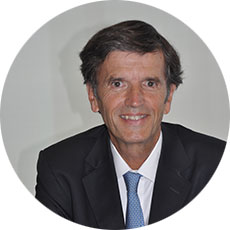 Extensive experience in Corporate, contract and Infrastructure, serving as advisor to companies with an integral view of their business. Has participated in important domestic and international transactions, especially in the area of infrastructure, gas, telecommunications, oil, electric power and construction. Broad practice serving as advisor to top national and international economic groups.

Honored by the Prosecutor’s Office of the Province of Buenos Aires and by the Government General Counsel for the grades achieved in his course of study. Worked at both Entities of the Provincial Constitution.

Member of the Corporate Law and Arbitration Committees of the Buenos Aires City Bar Association.

Member of the Arbitration Committee of the International Bar Association.

Member of the Society of Construction Law, United Kingdom.

Former Associate Professor of Civil Law I at the University of Buenos Aires.

Former Professor of Strategic Alliances and Joint Ventures in the Graduate Studies of the School of Law of the University of Buenos Aires.

Former Professor of Institutions of Private Law at the School of Law of the University of Buenos Aires.

Former Professor of Civil Law II at the University of Buenos Aires.

Served as advisor to companies of the Pérez Companc group regarding energy, construction and telecommunications, especially during the privatization processes of National and Provincial State companies.

Served as advisor to the International Consortium led by Endesa, Pérez Companc and Impregilo for the construction of the First Independent Transport Line in Argentina.

Participated as advisor in the privatization process of Airports in Argentina for the Consortium led by Paris Airports.

Served as advisor in the privatization of the Airport of Montevideo for the group led by London airport.

Served as advisor to the Endesa Group for the first Electric Interconnection between Argentina and Brazil.

Served as advisor to TGN in the expansion of its transmission capacity.

Served as advisor to several national and international companies in the construction of petrochemical plants, wind plants, freeways and oil and mining service agreements in Latin America.

Current strong presence in the Latin American infrastructure market, especially in the concession of freeways, telecommunications and electric power distribution and transmission.

Effects of Covid19 regarding the contracts performance, Ambito Financiero

The right to jurisdiction access and the interpretation of law, La Ley Magazine

Challenge of Expert Opinion. Duties and powers of the Judge regarding Expert’s opinion, La Ley Magazine

The responsibility of the Directors, La Ley Magazine